The real world is messy, unpredictable and complicated. For individual athletes and teams, Falcon Pursuit has developed a series of environmental and rider-specific telemetry systems. These telemetry systems deliver the ability to gain a greater insight into what is actually occurring within the athlete and their surrounding environment. As a result of the constant flow of data generated by Falcon Purist's telemetry systems, the real world is quickly broken down into acute, manageable pieces with all of the information flowing back into the Falcon Pursuit simulation engines.

So what exactly is telemetry? Telemetry is the automated communication between two points, in this case the athlete and environment communicating to the Falcon Pursuit Dashboard. The FP Dashboard transmits and monitors athlete biometrics, environmental conditions and other key metrics.

Why is telemetry important? It's all about data. Falcon Pursuit focuses on the ability to collect significant amounts of data effectively and efficiently. It gives Falcon Pursuit and its partners the ability to monitor, predict and make real-time changes that notably impact the results of the athlete.

In Formula 1, the engine is what makes the car “go.” The more efficient and powerful the engine can be the faster the car goes. Just as any mechanical engineer would be concerned about:

Falcon Pursuit has the same awareness for the human body and, like any engine, there are levels of efficiency.

Falcon Pursuit looks to build our athletes stronger by monitoring: 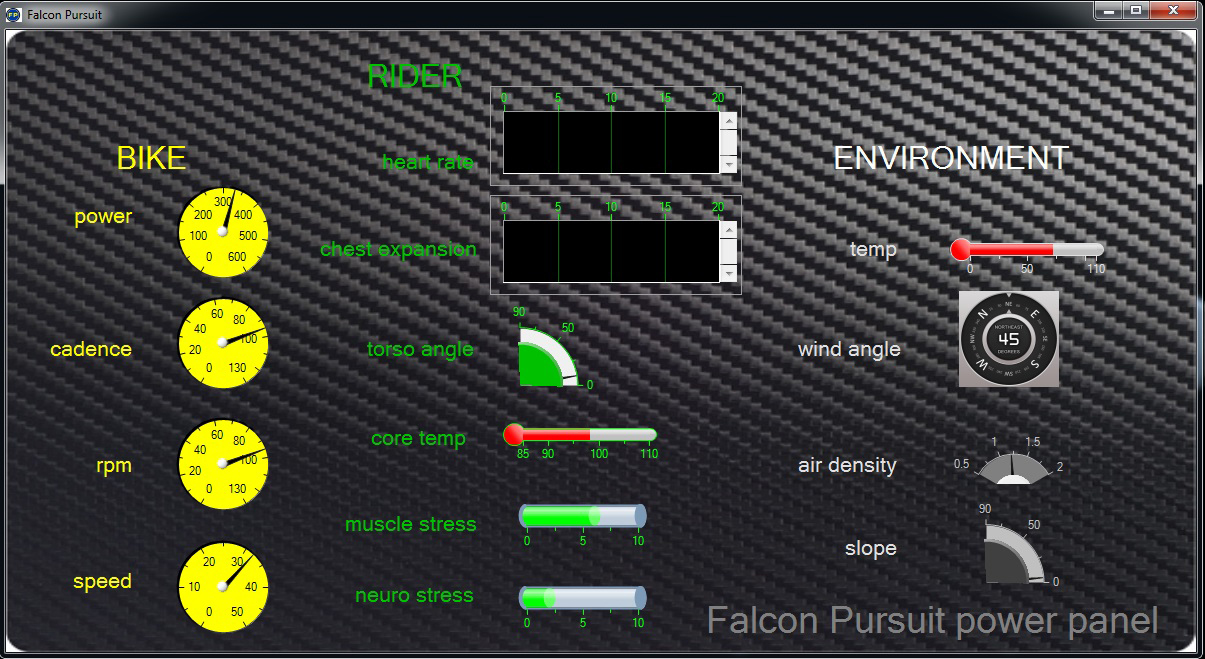 The Elements. Athletes are engaged in a constant battle with altitude, wind, humidity, precipitation, air pressure and temperature. Each factor has a significant impact on an athlete's performance. Falcon Pursuit utilizes a sophisticated group of tools that allows for the effective measurement of the environment that the athlete interacts with.

But I compete in a stadium; does environmental telemetry really matter?

As we discussed in Venue Dynamics, building off the examples of fans in a stadium at the Sochi Winter Olympics, 8,000 fans can effectively change the air density up ~0.6%, which over the 1000m speed skating event is .15 seconds. Think about it this way: at the 2014 Sochi Winter Olympics in the Men's 1000 meter Race 3rd and 5th were within .15 seconds of each other. The ability to effectively monitor and make adjustments in real time is the difference of being on the podium and not placing.