The cycle race is about to start and its pouring rain, what do you do?

You know 3 months a head of time you will be competing in a higher altitude climate, what do you do?

Train at altitude in the lead up to your event.

Venue Dynamics fall along a very similar line of thinking: there are multiple variables that an athlete has to interact with in any one location. As a result of those variables some solutions provide the athlete with a competitive advantage others prevent the athlete from performing at their best.

As we learned in Aerodynamics 101, air is composed of numerous particles. Try and think back to your high school chemistry class, as molecules undergo a catalyst a change happens. When gas molecules heat up they become less dense and as they cool down they become more dense. Therefore understanding where you are competing is pivotal for ensuring an athlete's success. As a result, what is 'fast' at 1300m may not be 'fast' at sea level.

Falcon Pursuit performed a series of evaluations, using its proprietary Athlete-Avatar™ to demonstrate the importance of Venue Dynamics. Lets look at this example highlighted with speed skating:

Skating at sea level vs. skating at altitude carries a significant range of affects on aerodynamics. Lets take for example two Winter Olympic locations: Salt Lake City, UT home of the 2002 Winter Olympics and the 2014 Sochi Winter Olympics; in order to best compare the two venues we kept temperature constant in both stadiums.

In Table 1: Winter Olympics: Stadium Venue Dynamic Analysis, outlines that as a result of the different altitudes Salt Lake at 1300m and Sochi near sea level there is a significant impact on air density, to the tune of 14%. If we were to simulate a speed skater skating in each environment, holding power, course, and skate friction constant, the skater in Salt Lake would complete 1km, 4.2 seconds faster than in Sochi! 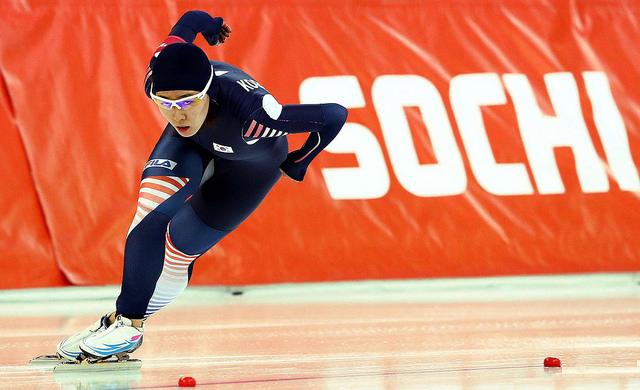 Our takeaway from this is: if we know that the air is denser at the Sochi venue, we know we need to optimize the athlete for those specific conditions. Neglecting to properly optimize an athletes: technique position, and equipment for a specific venue would yield a disastrous result for the athlete; when a speed skater is fighting for a hundredth of a second these details can not be overlooked.

Falcon Pursuit's understanding of venue dynamics goes even deeper though. What have we discussed so far? Air pressure, altitude, air density, and equipment, of course there is the quality of the ice (literally the density of the water) and….oh yeah there is us the fans! 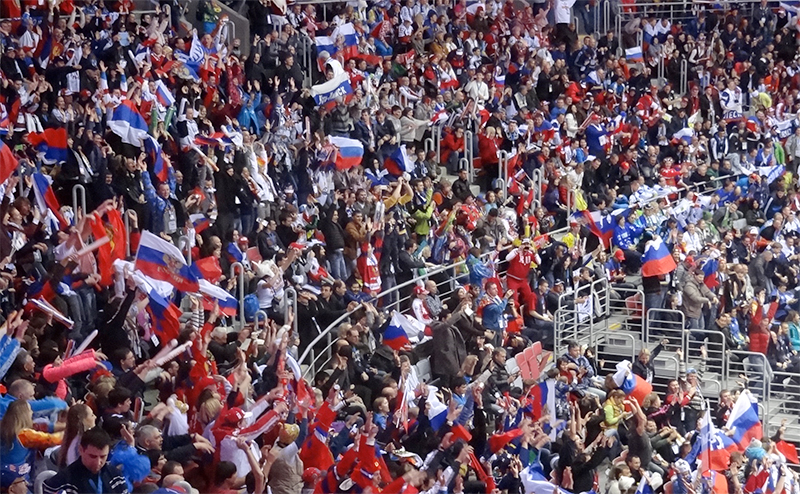 Remember the last sporting event you attended in a stadium? There you are packed with thousands of your closest friends. Specifically looking at the Sochi, Adler Arena Skating Center, this particular arena seats 8,000 people. These fans however are more than just spectators; they unknowingly are playing a key role, and are actually effecting the results of who wins. Think about it for a second, there are 8,000 screaming fans cheering on their country, passionately bantering with their neighbors, or as Falcon Pursuit looks at it, altering the air density that the athletes compete at.

As a result of those 8,000 fans breathing, screaming, heating up the stadium and dramatically increasing the humidity, they in effect are playing a pivotal role in chaining the environment which the athletes compete in effecting the air density as much as ~0.6%.

That's less than a percent can it really have an effect?

The answer is, Yes.

A change in Venue Dynamics in this case air density by 0.6% would create 15 grams of less drag for an athlete to overcome. Over 5000 meters that means an athlete skating in an empty stadium, at equivalent power, would skate .75 seconds slower than he would in a stadium packed with 8,000 fans [Moist air is less dense that dry air]. The change in air density also effects the torso angle of the athlete again creating a critical element to adjust based upon venue and crowd dynamics.

An athlete trains hard all year, they diet properly, sacrifice many aspects of their life, all for a single opportunity, one defining moment.

Why would you leave anything to chance?