In speed skating, the results for the top 10 athletes can be separated by less than 1 second, thus when fighting for the top step of the podium no detail is insignificant. When analyzing minute details it is critical to approach each variable in a holistic manner, as often one detail affects another. Here are the key areas Falcon Pursuit focused on in addition to Venue Dynamics: Athlete Positioning, Apparent Yaw Angles, and Equipment (Aero drag of speed skating suit vs. Friction of Speed Skate).

Lower is not always faster, the above graphic evaluates the body position for a top speed skater, and utilizing the Athlete-Avatar™ and CFD models the aerodynamic effects of augmenting the torso angle by 2 degrees up and 2 degrees down. The total skater drag is in the 4000 gram level at 15 m/sec velocity. The more upright position has ~ 3 % less drag for more than 1 second per kilometer speed drag advantage. The lowest body position is ~ 0.5 % less drag for just less than .13 second per kilometer speed advantage.

Key takeaway: Body position needs to be carefully evaluated and tested to ensure that the athlete's equipment supports the ideal body position for the athlete. 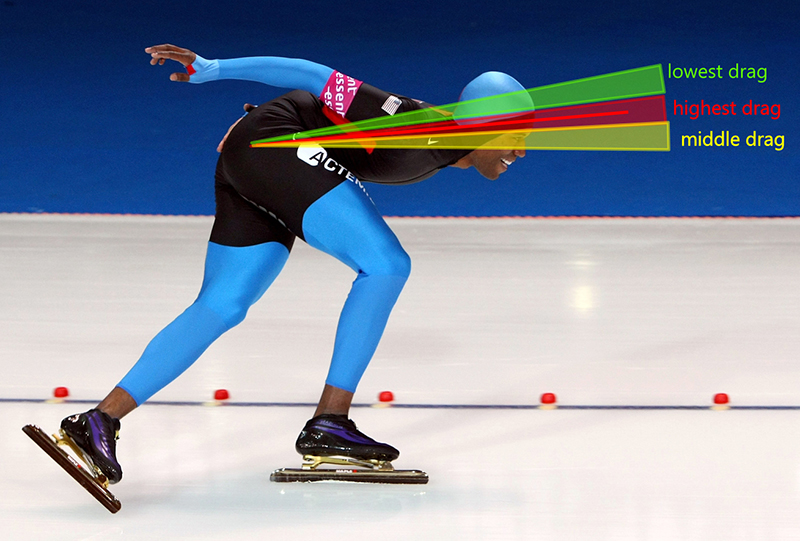 The Aerodynamics of Skating Through a Corner. The modern speed skating track has corners! That requires the use of apparent wind angle calculations to determine the angle of attack for the skater. Angle of attack is the angle the air strikes the athlete. From a track standpoint, 50% of the lap distance is in corners. The key is to use the apparent wind calculation to add the two components of velocity Vforward + Vlateral =Vtotal . In calm air [arenas] the direction of wind is directly from the front for the straightaway and the vector sum of the velocities for the corners. Calculating drag at apparent wind angles is crucial for skating aero positional optimization.

There are two frictional components of skating for the calculation of external propulsion forces: aerodynamic drag and blade to ice friction. Fintelman and all in 2011, produced an exhaustive analysis of the propulsion and frictional components of leg power and blade interaction with the ice. Keeping it simple, the blade frictional force is described Fice = uFN where u is the friction coefficient and FN the normal force of the skate on the ice. The total friction forces for skating propulsion can be approximately divided as 80% air friction and 20% blade to ice friction. We can use these to apply to the skating power and time equation. As 100 grams of aero reduction = 1 second per kilometer speed increase we can approximate a significant reduction of the coefficient of friction of ice u by say 7% results in a 0.14 second per kilometer speed increase. 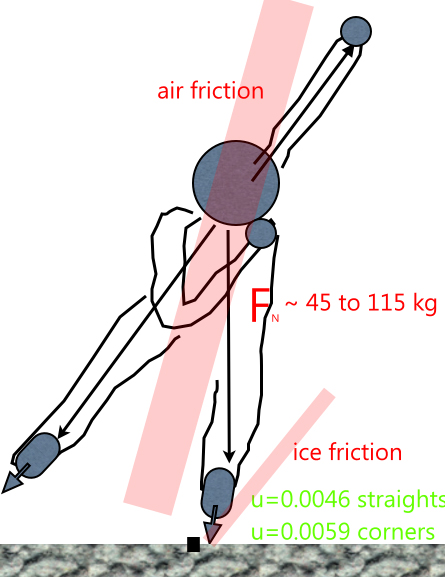